If you’ve been on Instagram in the last few months then you’ve probably seen a variety of your favorite strength coaches and physical therapists demonstrating the Nordic Hamstring Curl (NHC) or Nordic Hamstring Exercise (NHE) and preaching its utility in a variety of injury risk reduction programs. I’m often asked “why” we prescribe NHCs or “why XYZ isn’t the same?” So, I figured this would be a good opportunity to breakdown the current literature regarding this vogue training exercise. This isn’t meant to be an exhaustive literature review but more of an introduction to the conversation, and as always, feel free to message me with any questions or to tell me I got something wrong (it has happened before….).

So, what IS the Nordic Hamstring Curl and what makes it special? The NHC is an exercise where the lower leg is fixed in a tall kneeling position and the individual maintains their hips in neutral, or in line with their knee and shoulders, and slowly lowers their torso toward the floor. The primary emphasis of this exercise is to tap into the eccentric portion of a movement or rather, the elongation of a muscle under contraction. Think of eccentric movements as the “brakes” of the musculoskeletal system and there is a wealth of literature espousing the benefits of eccentric training (Roig et al., 2009) which is really a topic to be covered in another post. For this article, we’ll cover specific benefits of the NHC as well as touch on a few of the eccentric mechanisms. 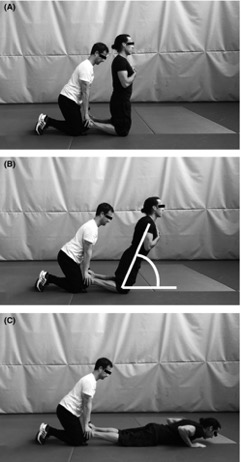 First, let’s lay some background information. Hamstring strains are one of the most common lower extremity injuries seen in sports, which is estimated to be about 12% of all injuries, and in some sports like Australian Rules Football, as high as 1 in 6 injuries (Orchard et al., 2013). In elite soccer clubs, these injuries are estimated to cost the club hundreds of thousands of dollars PER injury for a starting player (Ekstrand, 2013). Additionally, one of the intrinsic risk factors for hamstring strain is history of previous strain (Arnason et al., 2004), so a great deal of research has focused on how to reduce initial AND subsequent hamstring injuries. The NHC has shown to have a high protective effect on these injuries, with some research showing a reduction of initial HS injuries by 60% and recurrent HS injuries by 85% (Petersen et al., 2011) or 50% reduction as established by a recent literature review by Van Dyk et al, 2019. Despite this research, HS injuries have continued to rise by approx. 4% per year over the last 13 years (Ekstrand et al., 2016). Why? Well, you can lead a horse to water….but you can’t make them read the research and actually implement it effectively as the saying goes. (Van Der Horst et al, 2018, Bahr et al., 2015)

Additionally, we need to identify some risk factors for initial and subsequent HS injury. The literature is mixed on a few of these but overall, we see a few risk factors continue to be identified with the caveat, as always, of more research is needed. These include: difference in side to side HS strength of greater than 15% showed a 4-fold injury risk (Fousekis et al., 2011), decreased eccentric strength and shorter fascicle length showed a 17-fold increase in risk (Yeung et al., 2009) or 4x higher rate of hamstring injury (Timmins et al., 2016), Hamstring to Quad ratio of less than .6 or 60% (Cameron et al., 2003) 0r 50% as found by Lee at al., (2018) and of course, acute:chronic workload management (Duhig et al., 2016).

We’ve already discussed the efficacy of the NHC decreasing initial and subsequent injury risk above, so let’s tackle the other risk factors. Regarding isometric hamstring strength, Kilgallon et al. (2007) found a 50% increase in isometric strength at 20 deg of knee flexion and 20% increase at 50 degrees of knee flexion in the eccentric group but not in the concentric group after a 3-week progressive training program. It should be noted that the NHC was not the exercise intervention but rather the stiff-legged deadlift (more on this later). Delahunt et al. (2016) and Mjolsnes et al. (2004) found a 15% and 11% improvement in eccentric strength respectively with no significant increase in quad strength, which improved quad:ham ratios using a NHC protocol. The change in torque angles is conflicted, with Kilgallon et al. (2007) and Brockett et al. (2001) showing 21-7.7 degree increases in peak knee flexion angle torque respectively but Arnasen et al. (2008) and Iga et al (2012) did not. 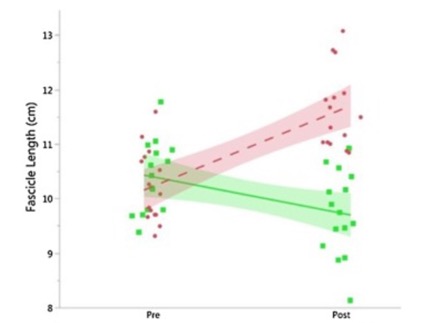 This all begs the question: How does the NHC reduce injury risk? The answer is…we don’t really know. Hamstring strains are believed to occur at the end of the eccentric contraction before heel strike during high-speed running (Heiderscheit et al., 2005; Schache et al., 2009), so it may be a combination of all of the above. Perhaps it’s neuromuscular? Or we are improving pennation angle, fascicle length and eccentric strength at more open knee angles? Maybe just increasing our eccentric hamstring strength at any angle or by building more muscle mass we see a protective effect? We’re still figuring out the mechanisms, but what we do have strong evidence for is, they work. If we’re trying to maximize this protective effect, we should probably be trying to tap into all the above. Specifically, a progressive NHC program (Severo-Silveira et al., 2018) that includes some hip dominant exercises as well. And of course, let’s not forget about our Acute:Chronic Workload management.

Regarding exercise selection, we do see some potentially different activation patterns between various exercise interventions. When comparing the NHC to the stiff-legged deadlift, Hegyi et al. (2017) demonstrated increased middle and distal semitendinosis activation and increased distal biceps femoris activation in the NHC compared to the stiff-legged deadlift. Additionally, when comparing the ball hamstring curl to the NHC, Monajati et al., (2017) found similar activation patterns across all phases of the movement although a higher percentage of hamstring recruitment was noted with the NHC. This allows us to establish some progressions clinically where a Nordic Hamstring Curl can be regressed to the ball curl if an athlete is unable to tolerate the increased loads associated with the former. Additionally, when programming the stiff-legged deadlift, it may be helpful to understand that that while both have an eccentric hamstring loading effect, the patterns are different. As previously mentioned, more hip dominant strategies may contribute to changes in fascicle length but the NHC seems to be more effective in facilitating middle and proximal hamstring activation. 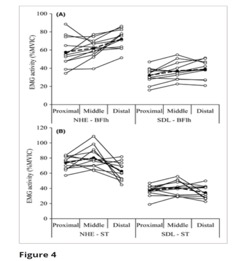 Summary Points:
• The Nordic Hamstring Curl is well-supported to reduce primary and recurrent hamstring risk although specific mechanical adaptation explanations are still debated.
• We seem to see a fairly consistent improvement in hamstring eccentric strength, hypertrophy and optimization of quad:hamstring ratios with NHC training although more research is needed.
• The NHC has a unique hamstring recruitment pattern when compared to alternative hamstring strengthening exercises which may support its specific application.
• Hamstring injury risk reduction protocols should likely consist of a progressive overloading of the NHC, have a hip-dominant counterpart to facilitate potential fascicle length improvement, and should include a strong workload management conversation.